skip to Main Content
Menu
On January 6th the Cambodia team slowly piled into Kelly Mattingly’s warm and inviting home, unaware of what we would experience over the next 17 hours. With name tags placed squarely on our chests, we formed new friendships and renewed old ones as we chatted with one another. The pizza soon arrived, and we converged on it like a pack of ravenous wolves- or better yet, hungry teenagers.
After dinner we piled into the front room for a team meeting lead by our faithful leaders, Kelly and Stephanie. We then split into committees and discussed the goals for each committee as well as fundraising ideas. Reconvening, we pooled our ideas and came up with some promising plans for raising funds for the wonderful Cambodian people!
By the time our meeting ended, the clock was ticking onward, and some people began to feel the affects of their long and busy weeks. As some of the team resolutely headed off to bed, others were equally firm in their goal to win the bet with Kelly.
“What is this bet?” you may be asking yourselves, dear readers.
At our December meeting Kelly promised to give a $15 dollar Cafe Rio (yumm!) giftcard to any-and every- person that could stay awake longer than her. For many of the team, their competitive side got ahold of them and they loaded themselves up on Dr. Pepper and tried everything they could to get Kelly to sleep, to no avail.
As the night grew later, the team separated into groups. Some people chatted lazily in the front room, others played card games, a few went outside and danced in the snow to stay awake, and some watched a season of The Office.
By 5:00 am, most were snuggled in their sleeping bags, lining several of Kelly’s rooms from wall to wall. Their were only eight or nine crazy stragglers that still held out hope that Kelly would sleep. And trust me, they were crazy (was there something to do with kitchen appliances and logging tools?!)
Alas, none of those poor people won the gift cards, for Kelly never slept. As the other half of the team (and probably the wiser half) awoke, we piled into the kitchen for a tasty breakfast.
Now was the time for the service project! We decided to make reusable sanitary pads, of which the young girls in Cambodia are in dire need. A member of our team and the community health committee, Rebekah, amazingly headed up the project. She put together instructions and made several of the sanitary napkins herself beforehand. 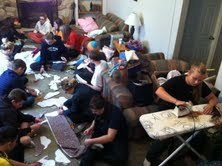 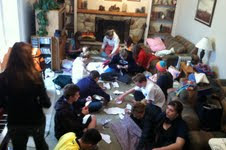 Creating a sort of assembly line, we got to work and proceeded to cut, pin, sew, and iron many of the pads. Some even took pads home to finish!

By the time we leave for Cambodia, we are aiming for 500 pads. That way, each school girl can have two.
As we left Kelly’s house, a little tired but still happy, I think it’s safe to say we were all a little sad to go. Through our retreat, the Cambodia team became just that: a team! I, for one am excited to see how we grow and thrive as we prepare for our trip this June!