The Utah Young Humanitarian Award interviews were this past Saturday, April 30th in downtown Salt Lake City. All of this year’s finalists proved to be amazing. All 14 finalists spoke with the panel of 10 judges and explained their experiences with service and the passion that they share for service in their lives. Four interviewees were chosen above the rest to receive scholarships for their amazing work within their communities. Each of the final 4 applicants have shown impressive leadership, initiated and headed up projects close to their hearts, and have exemplified dedication and self-less service to communities that are in great need of love and support. All 4 finalists have served both locally and internationally. Three of the four finalists will receive a $1,000 scholarship and the overall winner of the Utah Young Humanitarian Award will receive a $5,000 scholarship. The winner will be announced on May 19th at the Annual Benefit at LaCallie. 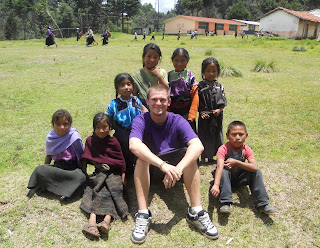 Andrew Hagedorn has directed his passion for service toward the homeless in Salt Lake City. He has realized that in order to solve a problem you have to address the causes, not just the symptoms. In order to combat homelessness in Salt Lake he has been involved with Youth for Youth for the last four years where they have been raising money for the Road Home. He is president of the Youth Government Commission that has partnered with Youth for Youth and has dedicated the last few years to helping the homeless in Salt Lake as well; specifically addressing the problem of teens and young adults that find themselves in that situation for a variety of reasons including being aged-out of the foster care system. The groups started small with bake sales and car washes and eventually graduated to larger fundraising events such as partnering with the Utah Symphony and having charity concerts. Through his leadership, Andrew was able to rally other youth to the cause and eventually the groups meet their goal of raising over $200,000. Andrew says of his experience, “I learned the importance of working with others and to never give up. Anything can be done if you put your mind and heart into it.” They have raised enough money to open two houses for aged-out foster care teens and are in the process of building housing units that will provide housing, case workers, and a transitional shelter for the homeless in Salt Lake. Andrew has also has served with the Neighborhood House, Peer Court and The Children’s Center. He travelled to Mexico on a Youthlinc humanitarian trip in 2010. He believes, “A humanitarian works for change. A volunteer is someone who shows up to help.” Andrew continues to do both. He shows up to help and lead others towards a permanent change. 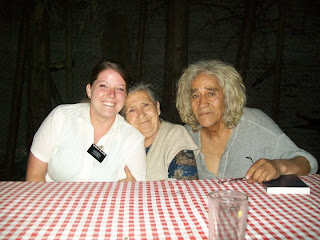 Emily Gillespie was raised with a firm belief in hard work and service. As a senior at Timpview High School she began and was president of the HOPE taskforce for three years where she worked with the school social workers and counselors to help at-risk students with depression. This cause was close to her heart as her high school was struggling with multiple young suicides. She made the effort to know everyone’s name in the school and at least smile at everyone she came in contact with. She says, “I just wanted everyone to know that there was at least one person at the school who knew who they were and that they mattered.” Emily also volunteered at Canary Garden Family Grief Counseling Center helping those coping with the recent loss of a loved one. She found a passion for helping others who were suffering through difficult times. After high school she had the opportunity to spend time in Mexico working on projects in two orphanages and building homes for poor families. As a student at Utah Valley University, she spent the summer of 2008 in Uganda with HELP International holding teacher improvement classes, building libraries and adobe stoves and working with children with disabilities and their care takers. She says “that experience changed my life forever as I learned the differences between wants and needs.” Nine months into her LDS mission in Chile the big earthquake of February 2010 hit the country and she was able to help in the recovery efforts in Machali. Since she has been home she has been volunteering with the Service-Learning community at UVU and is one semester away from graduating with an honors degree in philosophy and minors in recreation and community health. Her future plans include graduate school to study to be a recreational therapist and continue to serve. 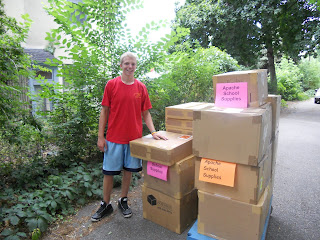 Jeffrey Scott has learned to make a difference by persevering and nurturing hope. As a senior at Judge Memorial Catholic High School, Jeffrey is the development manager and founder of the Apache Project. This project is a partnership between St. Charles Elementary on the San Carlos Apache Indian Reservation and Judge Memorial. When Jeffrey first visited the Apache Reservations with this brother he was appalled by the poverty and hopelessness that can exist just minutes from one America’s largest cities. He says, “In that instant, the true nature of solidarity was burned in my heart. Solidarity is being with, respecting and belonging to one another.” Since that visit the Apache Project has sent over 3.5 tons of school supplies and clothing to the Reservation. Jeffrey is working to build the necessary relationship with the Apache people to keep the program running and gather more information about the most sustainable and helpful practices to help the people on the reservation. Jeffrey plans to study medicine and return to the reservation to work as a physician. In addition to his dedication to the Apache Project, Jeffrey has also worked with the Ulster Peace Project since 2008 which promotes peace in Northern Ireland by hosting workshops in Salt Lake focused on communication and conflict resolution. Again, he credits solidarity as the basis of his humanitarianism. “Solidarity is an intimate, slow process that is vital for peace and justice.” He credits his time with the Boy Scouts of America as the beginning of his love for service. He is Student Body President at Judge Memorial, is a member of Rotary Interact Club and enjoys being a referee for a youth lacrosse league. Jeffrey says, “Service is not something I do. It is my way of life; it is who I am.” 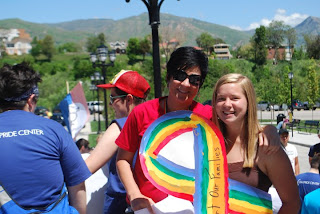 Cara Cerise is dedicated to the equality and inclusion of all people no matter what age, race, social status, religion or sexual orientation. While growing up, Cara felt that she could not be the only person who sometimes felt out of place and needing a support group. She served as a camp counselor at Camp Anytown, a human relations/student leadership retreat ran by the Inclusion Center for Community and Justice and has been a dedicated volunteer since. Cara says “after attending Camp Anytown, my life was changed forever. There I found my voice as a young leader and immediately began to seek out opportunities to serve.” At age 16 she became president of her high school’s social justice club, BOND (Building One New Dream), and simultaneously founded the Utah chapter of COLAGE: People with Lesbian, Gay, Bisexual, Transgender, and Queer Parents which supports Utah’s youth who are growing up in un-traditional family units. After high school, Cara chose the road less traveled and spent a year living in Paraguay working with the organization Amor y Esperanza where she worked hands-on with special needs elementary students in the rural villages. These days she serves on the Board of Directors of the Inclusion Center for Community and Justice. Cara is working toward HIV prevention as a Woman’s Health Intern at the Utah Pride Center where she is also a translator. “My goal is to connect people with the resources and support they need in order to live happy and healthy lives.” As a sociology and Spanish major at Westminster College, she hopes to further this goal in her future career by one day serving marginalized and undeserved populations.