After spending countless hours in different airports and a couple of hours on buses and boats, we finally arrived to the beautiful Heliconia Lodge. It’s a whole new world here. The Lodge is located in the middle of the Amazon rainforest and the sounds 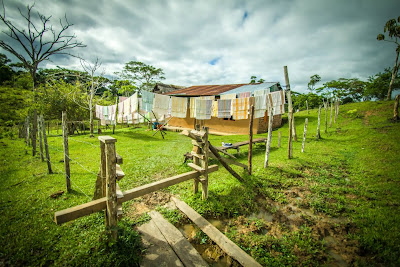 of the jungle are never ceasing. Shortly after arriving we boarded another boat and took a twenty minute ride to our FAVORITE place in the whole wide world, the village of Yanamono. The children’s laughter could be heard above the hum of the motor as we approached the village. I am pretty sure I can speak for all of us when I say that was one of the warmest welcomes any of us had ever received. Walking into the village was exciting and overwhelming all at the same time. We were obviously far from home, the trees were different, the animals were different, the smells were different, and it was all a new adventure. Walking up the path to the community center we were showered with hugs and kisses as the villagers gave us their thanks and homemade gifts. Opening Ceremonies was a great exchange between both cultures. We took turns sharing different songs and dances. The village leader said that we would begin as strangers but leave as family. 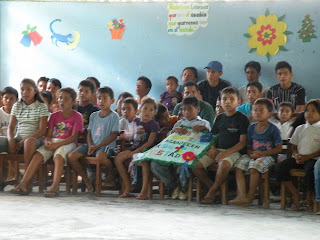