skip to Main Content
Menu
Hola, everyone!
Wow, what a LOONNNGGG day! We went up to the village again and worked more on the mural (which is ALMOST done!!!), and then we continued painting and cleaning up the classrooms to be ready for school today. We got all the classrooms done except one, so we will paint and clean that one on Saturday (our last day at the village). 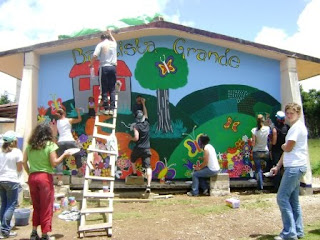 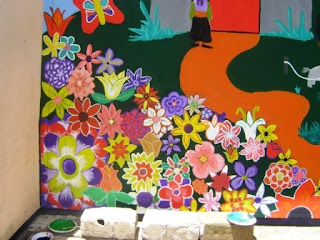 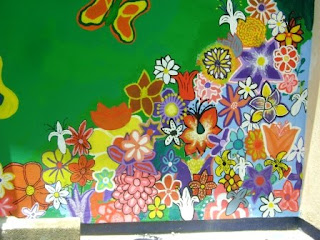 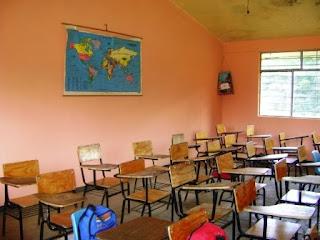 The “after” picture of the painted classroom! Refer to my last post to see the “before” pic 😛
We had a little bit of contention for the first time but it eventually blew over and we were able to get everything done that we had hoped for. One really neat thing that came up is that we decided to buy the village a nice, sturdy ladder. Currently all they have are a couple of rickety wooden poles with sketchy little strips of wood for each rung – and believe me, they are NOT safe. A fellow team member suggested leaving them with a nicer one for them to use and we bought one yesterday morning!
After we got all our work done at the village, the plan was to go down to Chamula and join in the festivities while they celebrated their Saint, San Juan. From there, we all separated into groups and walked around shopping and trying to find something to eat. However, we had a little bit of drama from that point! One group actually was surrounded by a huge circle of Mexican policemen because of confusion over a camera. One of our team members took out their camera to take a picture of someone and when asked to put the camera away (she did not actually take a picture), she immediately did without any hesitation. However, apparently, the woman-to-be-photographed found the policemen and the language barrier made for a VERY scary event!!
I was not there for that, however, a few of us had our own scary drama. Upon arriving in Chamula, four of us decided we did not want to stay for the full time, so we found Paul and made sure it would be alright for us to take a cab down to San Cristobal. We were all SUPER hungry but did not really trust much of the food at the street vendors in Chamula and we all felt a little uncomfortable being there, as the fiesta was a little too sketchy for us.. Anyway, we ended up finally finding a “cab.” These taxis coming from Chamula to San Cristobal Central were like 15-passenger vans.. And there were at least 20 people squeezed into it. At LEAST! We dropped off a couple people along the way but as we rolled to the end of the road (which the man told us would be in San Cristobal Central), we had no idea where we were. He then told us the main square was about three blocks one direction, so we started walking! After about eight blocks of unfamiliar territory, we again asked someone who then led us to a DIFFERENT “main square”, however we eventually found our way to the pedestrian street and market we had previously shopped at. After that, we found the yummy restaurant we ate at while watching the World Cup and ate delicious tacos.. Which have never tasted so good! Thankfully, the taxi bringing us from downtown to La Alborrada knew exactly where he was going.. I do NOT think I could have taken anymore adventures!
What a crazy day.
Well, we are headed to the village again!
Hasta luego!