We kicked off our journey by getting to know each other at the January meeting with a game of two truths and a lie.  This game taught us that we have more broken bones than actual people in the group, to beware because when angry, others have been known to cut off people’s fingers, and to leave sock monkeys off of our packing lists.  After discussing a few matters of business, we were assigned to our committees, where we played a no-talking-no-touching-cup-stacking game. It was challenging, but also quite comical!

Each committee broke off to decide what they need to do before take off.  For example, the education committee made plans to go to Real Life in Salt Lake’s Mondo Art project activity on Monday, which was a big hit.  Those who went got to try foods from all over the world, see pictures drawn by kids in Napal, and make our own art which will be sent to all the countries Youthlinc is visiting this year.

If any of you are interested, there is a fundraiser dinner at Cafe Trang on February 20th from 6-8 pm.  It will be a celebratory evening with dinner, dragon dancing, and a brief explanation of our planned service in country.  The cost is $30 per person, but as always, whatever you are willing to donate is much appreciated.  The money raised this night will go to fund in country projects such as microloans and school supplies for the kids.  The address is 307 West 200 South, Salt Lake City.  RSVP by February 15th to office@youthlinc.org or call 801-467-4417.

The meeting ended with a couple of last words from group leader Britnie.  She explained to us that the no-talking-no-touching-cup-stacking game we played at the beginning will be similar to our experiences in Vietnam. It is going to be challenging and frustrating because of the language barrier, but as we learned in the game, many hands makes light work, and as a team, we will have the most amazing experience and learn to love each other and the people of Song Cau.

Just a reminder for the team, you should be half-way done with your service hours by the February meeting.  We cannot wait to see you at the retreat! And don’t forget your food assignment. 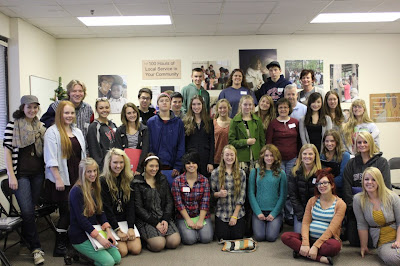