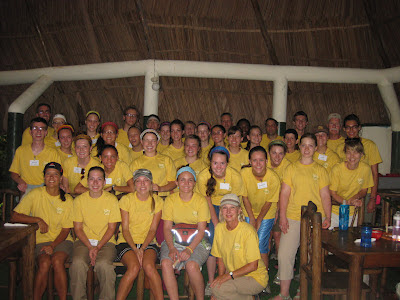 ¡Hola amigos! Sorry about the delay with the posts, there is very little internet access here in the jungle. On the 19th, we traveled all day, but there were a lot of delays. We got on our first plane leaving Salt Lake about thirty minutes late and had to run to get to our next plane. Even with all of the delays, we were able to get to Guatemala City safe and sound. All of the lines became massive with our huge group of forty people, but we were all able to finally get through. Bianca, our super helper from Ak´Tenamit, came to guide us to the hostel for pizza to spend the night.

On the 20th, we left the hostel at about six and went to Quirigua, home of some of the largest stellas in the world. We were able to spend an hour there to explore and after that we went to a port on the Rio Dulce. This was where we were able to get a taste of the kinds of foods we would be eating for most of the trip, rice and veggies. After dinner, we headed to the castle and explored the many passages, the dungeons, and the outlooks over the river. Finally we traveled to Ak´Tenamit and the girls got off at the girls´ dormatory and the boys left to go to the boys´ dormatories. Where the girls were staying was in a large room with mosquito netting hanging from every possible place, making us have to duck and weave through the strings. The boys were in more seperate bungalows and although they were smaller, they were very tidy and comfortable. When we were able to get settled, the girls headed back over to the boys side to have our first real dinner as a team in Guatemala. After dinner, the girls waited for the boat and when we got back to our dorms, we were all tuckered out and got into bed for our first night in the jungle.

On the 21st, we woke up and went to the opening ceremonies where we danced with the locals during the marimba (the traditional dance to the marimba) and then the group did the boot scout and boogie while the students were playing the marimba. Dustin, Caron, and Ellie did a skit, Miriam, Jessica, Hannah M., Katelyn, and Bree sang “O America” and “Star Spangled Banner”. When all the fun was done, we took a tour of the school grounds and talked, or for some of us tried to talk, to the students about what they were learning. The middle school and high school are the ones that are located by the boys´ dorms. After we had come back and gotten all settled, we were told by Miriam and Shelly that we were moving to Finca Tatin, the hotel in the middle of the two sites. After getting settled at Finca, we were able to lounge around in the hammocks and the swinging chairs. For dinner, it was the first time that we traveled together as a team to dinner. After dinner, we came back, played games, and hung out. After a while, Miriam taught some of us how to Salsa, which, of course, was loads of fun! Sam and Jerly were some of the best dancers of the night. We also got some of the other boys to come up and dance away, even if they had two left feet. Our hosts, Chris and Paulo, are very great to us and keep us happy at the Finca!

That´s all for today! We´ll try to get back on the blog as soon as we can. We love you all!