skip to Main Content
Menu
Blog created by Jadyn Carlsen
6/22/12
This was the first day that we were able to start working with the students and the Vocational Committee began teaching the eleventh grade class about the 4 P’s of Marketing. We split our group into four groups and assisted the Ak’Tenamit students with their agricultural chores.  After chores, we were able to go play a game of soccer. After the game, some students and some of the team headed down to the river to take a swim and cool off from the heat. We then went to work on the different constructions projects.  The construction projects included: Painting the Girl’s dormitories; making a path from the river to the bungalows; computer lab and Commodore expansion projects.
6/23/12
After breakfast, we headed to Livingston. On the boat ride, we traveled to the Atlantic coast and were able to see Belize off the coast. Before going shopping, we went to Seven Alters and were able to hang out and swim. After hiking back down, we headed to Bugga Mamas to eat and then we did some shopping in Livingston.. 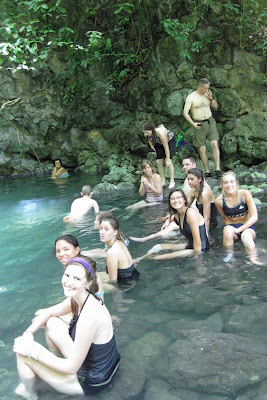 6/24/12
After breakfast today, we went to the Cave of the Tiger. After hiking in, we were able to jump off into the water and swim/climb back to a second waterfall. If you looked up into it, you could see bats just swarming around and some of them were the largest bats I have ever seen! Following dinner that evening we attended a Evangelical Church in a nearby village.
6/25/12
Our structure teaching began today.  The students were so eager to learn and participate. The team members that were not teaching helped with construction.  After lunch we all continue with various construction projects such as: hauling bricks up to the lunchroom, painting the girls’ dorm, and mixing cement. 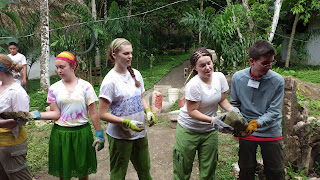 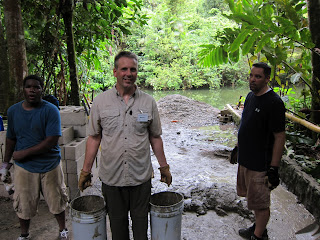 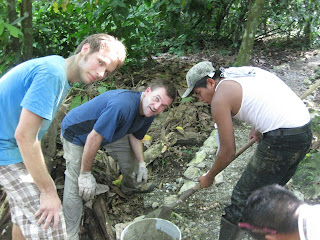 Teaching again today and everything went smoothly. After teaching, we broke up and went back to the different construction sites which were progressing very well! A few people decided to pull a prank on Ryan today by putting a crab in his bag. Sandy found a coral snake, a poisonous snake, under a rock, but Greg was there to be the hero and chopped it in half.
6/27/12
After breakfast, we went to the village PG Tatin. We delivered 32 water filters to the very excited village families.. We also had some time to play with the kids of the village. Some people who were sick on the day that we had gone to the Cave of the Tiger took a quick stop and toured the cave. The other part of the group headed back to the lunchroom to eat some lunch. We then split up to go work on the construction projects. The walkway to the boys’ bungalows was about ¾ of the way done, murals are going very well and we got all we could get done on the extension of the commodore before we ran out of supplies for the day.
6/28/12 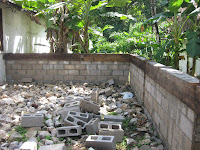 The day began with lessons and construction – the construction projects are almost finished.  At 10:40, we had a dance with the locals. Not only did we dance to some of their traditional music, we also heard music that many of our kids listen to today. We all had a ton of fun and were able to bond as a team and with the locals also. We continued the dance until lunch. After lunch, we went back to work on the construction projects. All throughout the day, the Medical Committee were giving eye tests to the students and surrounding villages. At the end of the day, everyone was able to feel very accomplished.
6/29/12
This morning the students at Ak’Tenamit taught us how to carve coconuts to make necklaces, bracelets, earrings, and rings. When we finished up, we went to the commodore and taught the locals how to do the Virginia Reel. and then we had a soccer game between Youthlinc and Ak’Tenamit.  After lunch we went to work on construction projects.  By the end of the day, the commodore expansion was finished, the trail to the boys’ bungalows was finished, and all of the painting in the girls’ dorms was finished, with a few murals left for the girls to paint. The work that we accomplished was phenomenal and we were all very proud of the work we were able to complete.  Our last meeting and reflections at Ak’Tenamit was an emotional ones and the last night at Finca was bittersweet. 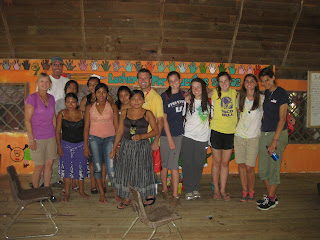 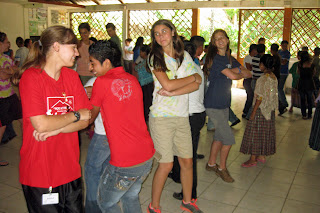 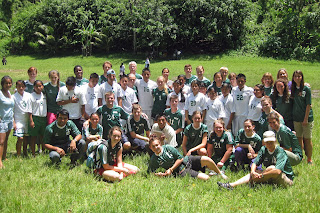 6/30/12
Following breakfast, we had our fun fair where we passed out our friendship bracelets that we made, worked on teamwork building games (such as the human knot), and played some ultimate Frisbee, football, and dodge ball. After we finished with the fun fair, we had our closing ceremonies. There were speeches from Ak’Tenamit Board of Education, Ak’Tenamit students, our leaders and our youth. We realized here how much of an impact we had on them, and the impact they had on us. After we left, we were able to get all of us on the bus to Tikal.
7/1/12
At about 8:30, the tour of Tikal began.. We were able to see the Grand Plaza with Temples 1 & 2, we saw Temples 3 & 5 and hiked up Temple 4 which is the highest known temple in the Mayan world. The weather was very nice and not very hot for most of the day.  Following lunch we took a zip line tour through the jungle canopy. The jungle looked amazing from the heights that we were at. When we finished, we headed off to Flores to get in some last minute shopping. 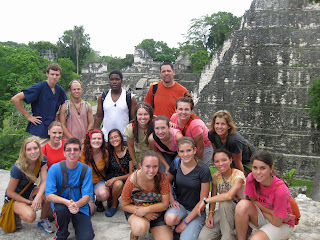 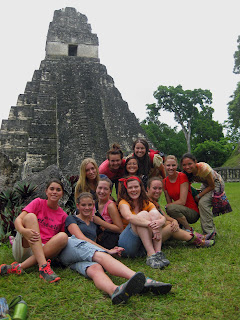 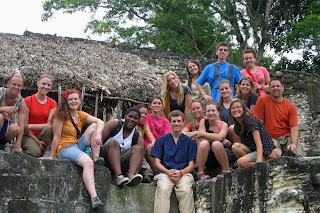 7/2/12
Travel Day from Tikal to Guatemala City.  We drove for about eleven hours that day.  We stopped only a couple times and one of those times the bus broke down. While they were trying to fix it, we went over to the gas station and bought some ice cream and snacks. That evening we had our final reflections and awards ceremony.
7/3/12
We left ready and packed by 5:30 a.m. and carpooled over to the airport. We were able to get through security and to our terminal plenty early. The plane was on time, unlike the last time, and we were loaded quickly and efficiently. We had to say goodbye to Guatemala, a country that we now all loved and have a special place in our heart for. When we got to Dallas, we broke off into small groups that went to find food. We were ready to start our six hour layover. Although it was very long, it went by fairly fast and we were able to entertain ourselves. When we boarded our flight in Dallas, all of us were very excited to finally be going home, but we all knew that we would miss our new family and miss the amazing country of Guatemala.