skip to Main Content
Menu
After 6-months of planning and a dozen meetings, the 2012 Cambodia Friends & Family trip is finally here! Thirty-five adventurous, service-oriented young men and women (and a few of their adult leaders) packed-up their personal bags and 34 donation-filled Youthlinc bags and braved 25-hours of flying to get from Salt Lake City to Phnom Penh, Cambodia. We landed to 85 degree weather with over 90% humidity…at 10:00 pm at night! After loading and stuffing all our bags into one bus, we spent the night in downtown Phnom Penh at the Pa-Am hotel,
We woke to the sounds of a bustling city, had breakfast, loaded the bus again and headed to see some of the local, historical sites that tell of Cambodia’s tragic history. Our first stop was at the Tuol Sleng Genocide Museum, an old high school that had been converted to a prison and interrogation center where over 20,000 men, women and children were tortured and killed after Pol Pot’s Khmer Rouge took over the country in 1975. 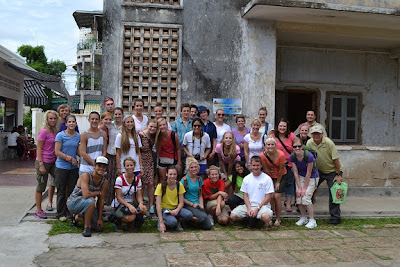 The museum still echoes with the cries of the atrocities committed there and the somber tour left a dramatic impact on the entire group but solidified our desire to serve the great people of this country. From there, we drove a few miles outside the city to visit the historic Killing Fields where we went on an audio tour and heard the details of the 20,000 people who were killed and buried here in mass graves. From both sites we learned that keeping the memory of these atrocities alive is the key to building a “new, strong and just state.” 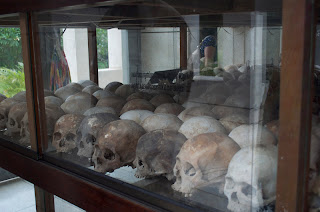 After our tours, we were all introduced to the smells and tastes (and flies) of Cambodian cuisine where a few people tried the local delicacies. Most everyone else had the ham fried rice. From there, we boarded our bus and started the 7-hour drive to Siem Reap, where we will be staying for the remainder of our trip. 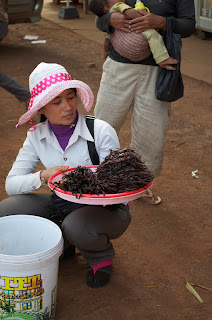 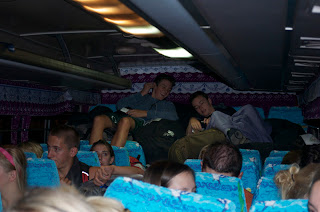 The group got to know each other along the way and we enjoyed practicing our songs for the opening ceremony. The highlight came at one of the local rest stops where the group tasted the fried tarantulas and local fruits being sold by young children. We’re now settled into our hotel – Ma’s House – and ready to start working and learning for the villagers in Peak Sneng.