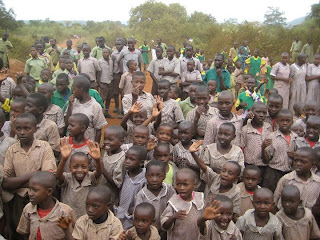 Kids greeting us as we drove into Kiamuri 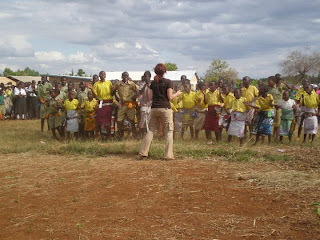 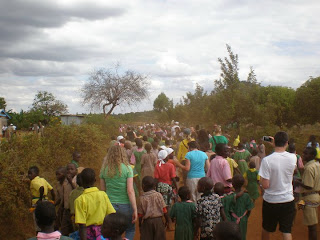 All the kids running to meet us at Opening Ceramonies 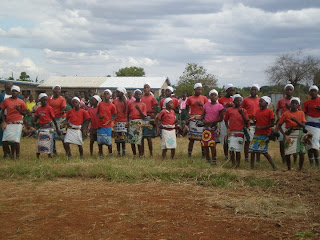 Girls dancing for us.
I have never been this happy in my life. I am sitting in the most beautiful place in the world, under the Kenyan sky, listening to the crickets chirp. What more could I ask for? We woke up today and visited a hospital. It was heart wrenching to see, however i felt bad for feeling sad because i could tell they people who ran the hospital were proud of what they have accomplished. After the visit, we began our 2 hour dirt road expedition to Kiamuri. Along the way, we would all wave at the kids along the road. I couldn’t help but smile the whole time. My cheeks even began to hurt because I was smiling for so long. As we drove into Kiamuri, all the kids lined the street and cheered our arrival. We stopped and got pictures as the kids clapped, screamed, and waved at us. After we had unpacked at St. Luke’s Hospital, we went to Opening Ceremonies. As we approached the school, all the kids took off running towards us and greeted us with hugs and big smiles. They all wanted to hold hands with a “Mazungu” (white person). Everything about this place is amazing. All the schools danced and sang for us at the ceremonies and it was the most amazing thing I have ever witnessed in my life. Everyone is so excited to have us here and are so thankful for us coming, but they have it backwards. I am so thankful for them!
I know this blog is for everyone but I am going to tell a personal story that was the COOLEST part of the day for me. Last year, my best friend was on the Kenya Team. While in Kiamuri, he met a secondary school student name Isaac. They grew very close and have been writing emails and even facebooking ever since. Before our team left this year, my friend McKay sent Isaac an email asking if he would be in the village while we were here, however Isaac is now attending University in Mombasa and was not sure if he would make it. After Ceremonies ended, i heard somebody call our Alumn Leaders name, who was also on last years team, and give her a big hug. I immediately knew it was Isaac. he traveled 12 hours by car just to see Lauren and I. Turn out, he got the dates of our visit mixed up and arrived 5 days early and is leaving tomorrow morning. IT was just amazing to see the ambition and drive this kid has for life. He is attending University to become an Electrical Engineer with his focus on green electricity, such as windmills and solar panels. Right now he has plans to have a windmill that he has made from scratch at his university put up at his Shamba by August. After about a year of testing it, he hopes to receive government help and supply some of the schools in Kiamuri with windmills. We ended up talking for a good 2 hours and he even walked us back to St. Lukes where I gave him the gift McKay sent for him. I know i have only Isaac one time, but we will be lifelong friends. This is just one example fo the love and kindness shown in this country. A poor college student payed for a 12 hours bus ride to say hi to his friend’s friend whom he had only heard stories about. I honestly could go on for hours about the people and everything that has happened today. There is just no way of capturing the emotion and feelings I have felt today, or even begin to explain the events. The one thing I do know is I love Kenya. 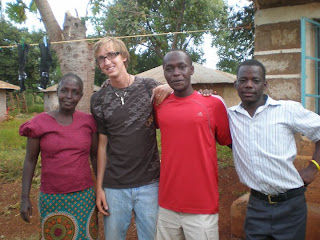 Isaac (in red) with his mother and best friend Isaac.