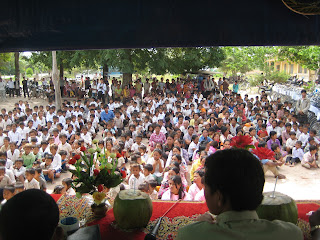 Today we had opening ceremonies! We had to drive an hour and a half to get to the village, Choung Rouk first. When we first walked in, the entire village was waiting and they all applauded. After we all sat down, the school kids sang their national anthem for us. There were lots of speeches, and then we got to perform. We sang our national anthem, danced the boot-scoot-boogie, and sang Three Little Birds by Bob Marley. 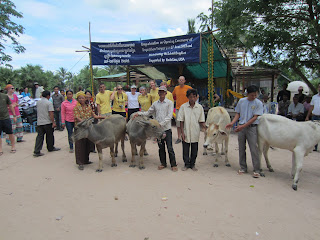 Then there were more speeches and we got to pass the new uniforms out to the kids. They were so excited to get them, and so grateful too! We also raised enough money for 70 bikes, as well as animals from the micro-enterprise team. 20 chickens and a water buffalo were distributed! 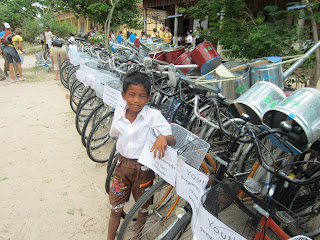 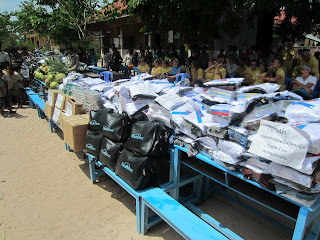 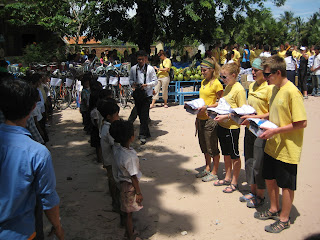 The kids were very eager to show us their English; they knew their ABCs and numbers. They are so cute! After we had them all passed out, we wanted to play games but the kids were really shy about it. But once they warmed up to us we got them to play games. Even though we weren’t able to explain their language, they caught on really quick. Their favorite game is London Bridges, but we also played Duck Duck Goose, Red Rover, Down By the Banks as well as hand games like Paddycake. It was really cute because they just loved to be around you. You didn’t have to do anything, they just love to hit your hands and hold on to you. It was really hard to say goodbye but unfortunately we had to. 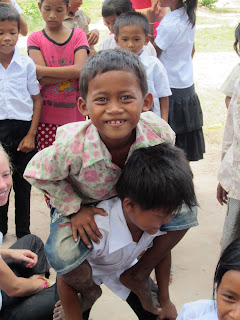 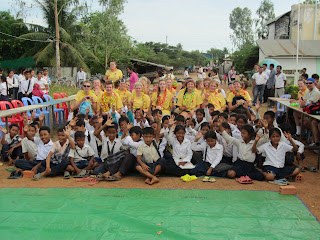 The next thing we did was go to Sustainable Cambodia. They were a lot more organized, and speak a lot better English there as well. They did some traditional dances for us, which was really cool to see that part of their culture. Next we did our same songs and dance as before,  plus a few more. We also threw in some double people cart wheels and hand stands while we were waiting for music. Anthony break-dance, and they LOVED that! They thought he was like a superstar. It was really funny. After that we pretty much lost control and it turned into a giant dance party! Which was really fun. Those Cambodian kids really know how to dance! We danced until it was dark, and it was cool because they played some music that we knew, like Justin Bieber. It was really tiring, but really fun, so we went to bed really early after we’d been dragged home. It was a very fun first day!
Written by Madi and Savannah