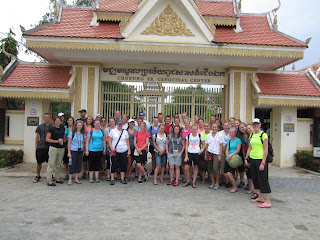 This is the Cambodia Youthlinc team!  On our visit to the Killing Fields we were able to learn about the infamous Khmer Rouge and the genocide they conducted on the cambodian people 30 years ago.  Pol Pot came to power and recruited young boys to help him create an agrarian communist country.  His agrarian communist country would contain only the uneducated villagers.  Doctors, teachers, people who wore glasses, had soft hands, spoke two languages, etc. were taken and brutally murdered.  Our group came not knowing the gravity of what had happened, experienced a flood of emotions, and left with the knowledge that we are all here on a mission to help the victims of this inhuman event. 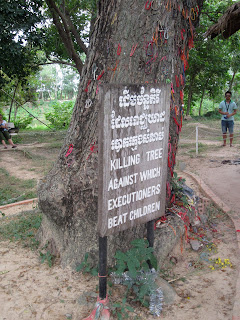 This is the Children’s Tree that soldiers would smash the heads of infants against while the mothers were forced to watch.  The mothers were then raped and killed as well. 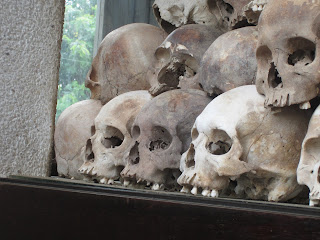 These skulls are in a monument that stands 17 stories high- each filled with bones of males, females, and children.
Tuolsleng School
The Cambodia Youthlinc team had a phenomenal experience at the Tuolsleng Prison (also known as S-21). S-21 was a high school before the Khmer Rouge and Pol Pot turned it into a interrogation facility where excessive torturing took place. In the brief years that S-21 was under the tyranny of Pol Pot 15,000 innocent Cambodians went through its walls. Of that 15,000 it left only 7 survivors. The pictures below are only a glimpse at the horror displayed at the school. The things that these innocent unsuspecting people were put through are unimaginable; how a human being could do them to another I am unable to wrap my mind around. 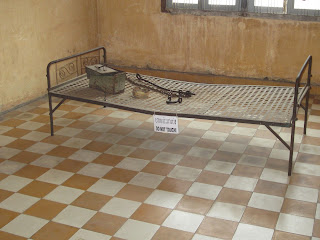 This is an example of one of the many rooms in S-21. These are the real items that were found in this particular room when the camp was liberated. On the wall in most of these rooms was a single picture displaying the body that was found in this room as well. In those pictures you can see the objects on the bed and how they might have been used to inflict pain upon the pictures lifeless body. 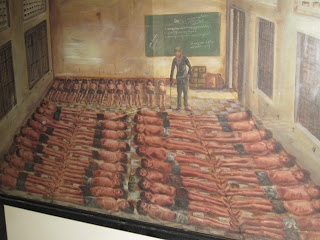 This picture shows one of the torture / “interrogation” methods used at Toulsleng. They would lay the people side by side and starve them. If they moved at all they were beaten. 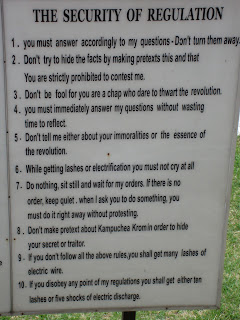 These are the unbending rules that Toulsleng was run by. There is no way you could not have broken at least one of these within a day. They were setting them up to fail everyday, and if you fail you get beaten. 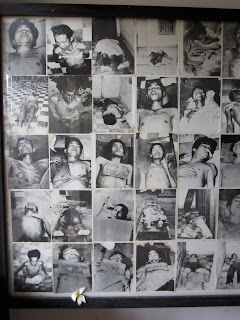 Boards just like this one filled many rooms. These are the people that innocently, unjustly, and brutally died at S-21 under the hands of Pol Pot. These pictures are graphic and can only give us a sense of the anguish these people surely went through. The things that Pol Pot did are terrible, but even more unbelievable are some of his ideals. One that stuck out and literally makes me sick is, “It is better to kill an innocent person by mistake than to let a traitor live by mistake”.